Latent Dirichlet Allocation (LDA) is an improved version of pLSI (if you want to check the detail, please click here). Its concept is very similar to pLSI. pLSI tried to learn all possible p(wi|zn), which are the probabilities that word i appears in latent topic n. That is also the same for LDA. However, pLSI has some critical problems. Because pLSI only learns topic mixtures p(z|d) for those documents on which it is trained, there is no natural way to use it to assign probability to a previously unseen document. The other problem is that the number of parameters pLSI needs to learn is kV+kM, which is linear to the number of training document. The linear growth in parameters suggests that the model is prone to overﬁtting and, empirically, overﬁtting is indeed a serious problem for pLSI.

The following are the mathematical details.
Assume that given parameters α and β, the joint distribution of a topic mixture θ, a set of N topics z, and a set of N words w is

where p(θ|α) is a Dirichlet distribution.
It's graphical representation is

Then we can get p(w|α, β) by integrating over θ and summing over z.

After that, we can derive p(D|α, β) by multiplying the probabilities p(w|α, β) of all documents appear in the corpus D.

That is the mathematical equation of LDA.

The main difference of pLSI and LDA can be highlighted in the following figure. 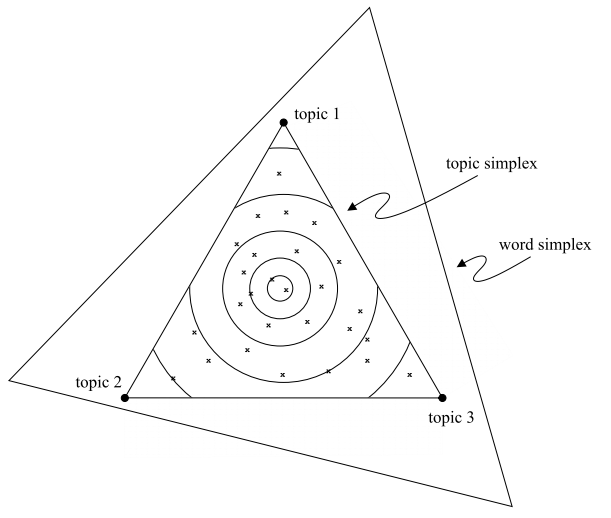 In this paper, they also want to find the low dimension underlying manifold structure from high dimension space.
The example is also "Swill roll".

"A" is the original data structure in high dimension space, and they want to find the underlying structure and expand them as "C".
They also assume that geodesic distance can be approximated by adding up a sequence of “short hops” between neighboring points (This concept is the same as previous paper).
However, they use different method to solve the underlying structure.
They proposed isometric feature mapping (Isomap) algorithm to solve it.The following table is their algorithm overview. 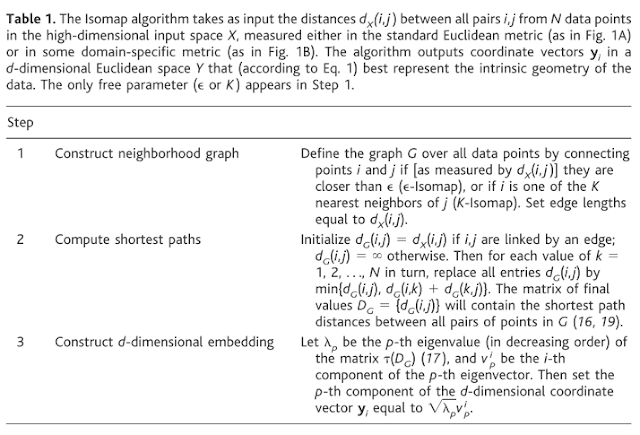 At the first step, they find the neighbor points for every point (the distance of them less then a threshold or found by KNN) . And construct a weighted graph G over the data points by connecting their neighbors.
Every point is viewed as a node in G, and the weight of one edge is defined as dx(i,j). dx(i,j) represent the distance between near points i and j.
After constructing this graph, we can compute the shortest distance of every two nodes by dynamic programming method (Floyd–Warshall algorithm). They denote this distance as dG(i,j).
Then, we know the distances of every two points in the underlying structure. Thus, we can start put them in the new low dimension space. They use classical  multidimensional scaling (MDS) to put the points into d-dimension  Euclidean space Y that best preserves the distances on the graph.
It can be fulfill by minimizing the following cost function. 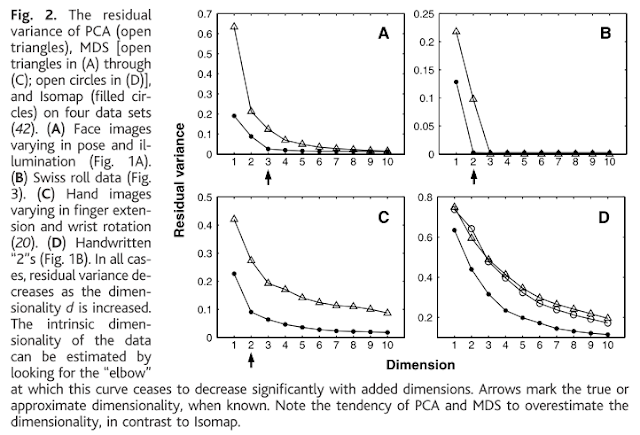 They put three experiments result on this paper. For all three data sets, the natural appearance of linear interpolations between distant points in the low dimensional coordinate space confirms that Isomap has captured the data’s perceptually relevant structure. 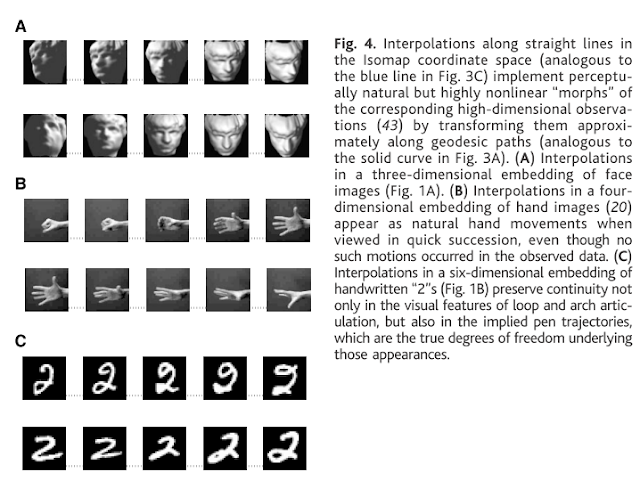