In this paper, they proposed a problem about ordinal regression, which is very different from the traditional learning problems, such as classification and metric regression.

The detail of the problem is defined as follows.
An input space X belongs to R^n with objects being represented by feature vectors x = (x1,...,xn)^T.
Y denotes the rank order.
For every training point in the set S, we want to find a mapping function that map the points to the rankings.

The error cost function is defined as

lpref  is 1 if and only if the ranking of h(x1) and h(x2) is different from y1 and y2.
The expected cost can be computed as

However, that is hard to minimize.
Thus, we first convert it into another set S', which is a set representing the pairwise ranking.

And in theorem 1, it said

Which means that for every projection function we get in the set S', the 0-1 loss for S' is proportional to the expected cost for S. Then, the minimum cost projection function found on the set S' will be the same as found on set S.  Thus, now the ordinal problem is converted into the classification problem and can be solved by SVM.

●Solving by using SVM
We want to find a projection vector W, and some biases that project original data into ranks.

Then, we can give SVM some degree of violation, and solve W.

After finding W, we can find different thresholds θ(ri) for different ranking now by minimizing the following equation under the constraint of above equation.

After doing this, we can get the final results we want as the following figure. 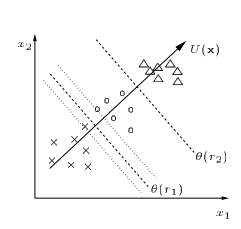 When new data comes, it simply project it by using W, and judge its rank by check the thresholds θ(ri)